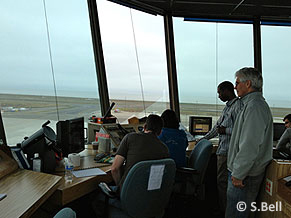 Thirteen pilots enjoyed a tour of OAK’s south tower on Monday, March 4, 2014. Tower supervisors Dale and Debbie were our hosts and gave us an overview of the tower operations and answered our questions. In addition to seeing the radar screen and seeing how airplanes are “tagged up”, we also saw the “strips” for each IFR departure, the hand completed strips for VFR flights and the new hand held light gun. (The older versions of the light gun were ceiling mounted, and the controllers had to reach up and pull them down on their cables to use them.) While we were up there, there was one controller working “local” (tower frequency) and the other working ground. Each of those controllers was working with a trainee. As professional and as busy as they were, it was amazing to see what a laid back and casual atmosphere there was in the tower!

Although it was an overcast day, we still had visibility as far as downtown San Francisco! The new tower being built certainly stood out. Over 150 feet higher than the new tower, they expect to be able to see San Jose arrivals from it on a clear day. (As well as up close and personal views of traffic on 27L as well, I suspect.) With that height, we asked about the ground visibility for low overcast days, and they said they hoped to get ground radar, but didn’t think it would happen with this current budget. The new tower is supposed to open in 4 months, however, that may be delayed if there are any upcoming budget cuts!

A few notes from our tower controllers… 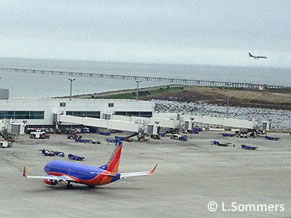 For arrivals from the northwest, i.e. from San Pablo Bay, when you are directed by NorCal to “fly to the Mormon Temple at or above 2,500′ and make right traffic for 27R”, when you switch to tower and tower instructs you to “make right traffic for 27R”, they still expect you to go all the way to the Mormon temple at 2,500 before turning to the airport, unless they tell you to go direct. This keeps the departing traffic separated from the arriving traffic.

When you say you are a Cessna, you could be anything from a Cessna 150 to a Cessna Citation, so it would be helpful to know what type of aircraft you are.
They don’t necessarily need to know that you are a student pilot, but for any pilot, if they give you instructions and you don’t understand what they want (or what they said), ask them to “say again”. Don’t ever just do what you think, make sure you ask for clarification!

The tower would like you to always squawk “STBY” when you are on the ground taxiing.
And their biggest pet peeve… when a pilot calls in to ground, and rambles on and on, telling the controller that they are in their red and white favorite airplane somewhere close to those buildings on the north field, and that they are going to fly to Sonoma Valley for lunch, and they are bringing their dog with them, and that they do have the current information, blah blah blah, and meanwhile someone is on short final and need a clearance to land, 5 other pilots are waiting for their clearances, and they can’t cut you off!

Many thanks to our incredible controllers at OAK!